How Not To Be A Networking Moron 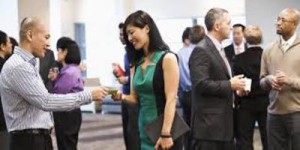 Chances are you’ve experienced a networking fubar before, either as the perpetrator or the victim. These snafus can often leave you empty handed, making pointless the time you spend networking. The following seven pointers will hopefully help you gain some perspective and bring an end to the networking madness.

1. It’s not all about you: Everyone knows you are at the networking event to promote your business, service, etc., but it’s important not to forget that the person you’re talking to is there for the same reason. Just as you want to be listened to when you are talking, so do they. One of the worst things you can do is tell someone about your business and then begin scanning the room as they start to tell you about theirs. It’s not only rude, but a sure way to guarantee that person will not want to do business with you.

2. Pay Attention: Now is a great time to master active listening. Stop thinking about what you are going to say next. This is where the person may actually tell you something that you may use to later close the deal. Of course this is only one reason you should pay attention. Another reason is that it’s disrespectful not to do so. Feel free to ask questions if you have genuine interest in learning more. Trust me! They’ll appreciate it.

3. Get your hormones under control: It’s a networking event. Just because someone makes eye contact with you and smile doesn’t mean that they want to go home with you. There’s no need to get all twitterpated here. It’s not flirting; it’s called being courteous. Also men, keep your eyes above the cleavage; this may be difficult to do at times, especially if you’re taller than the person to whom you’re talking. By all means, do not stare. It can tend to make others rather uncomfortable.

4. Dress for Success: My brother who is a wardrobe stylist says, “dress like you do what you do.” If you’re a broker of some sort, please don’t expect to be taken seriously when you show up in a tee shirt. Believe it or not, people make judgments about you from the moment they first lay eyes on you. While perception may not be reality, it’s reality to the person with the perception. And ladies, I truly hope this doesn’t sound sexist, because that is not the intention. However, if you don’t want men looking at your cleavage, it may be best to dress a bit more modest. If you put them out there, most men are going to look. You want people looking at your eyes. In this setting, it may not be a bad idea to cover the cleavage. Dress appropriately!

5. Hush Lush: It is common for venues to serve alcohol to their constituents, but you had better know when enough is enough. If you know yourself to be rude, overly flirty, personal space violating or otherwise, please refrain from consuming alcohol. Drink too much and people will never forget you, and it won’t be for a good reason. Now is a great time to practice being modest in your drinking.

6. What did you do with the business card: When someone hands you his or her business card at least take a look at it before storing it away in your pocket. It gives the impression that you are actually interested rather than just a business card collector. When possible, try to store the card somewhere that is respectable. If only your back pocket is available, hold the card in your left hand until you have moved on, then put the card away. This may seem petty, but trust me when I say, “it doesn’t go unnoticed.” And by all means, don’t ever leave the business card sitting on the table. There’s not a clearer sign that you don’t give a rats ass about someone else’s business.

7. Attempting to close the deal: We’ve all been taught to close the deal, but this is neither the time nor place. Share your 30 second commercial and talk a little in depth if time permits, but don’t try to close the deal. Remember, the person you’re talking to is there for the same reason that you are. Your focus should be to plant enough seeds to make yourself memorable. You now have their business card and have established rapport; later, you can follow up to close the deal.

9 thoughts on “How Not To Be A Networking Moron”